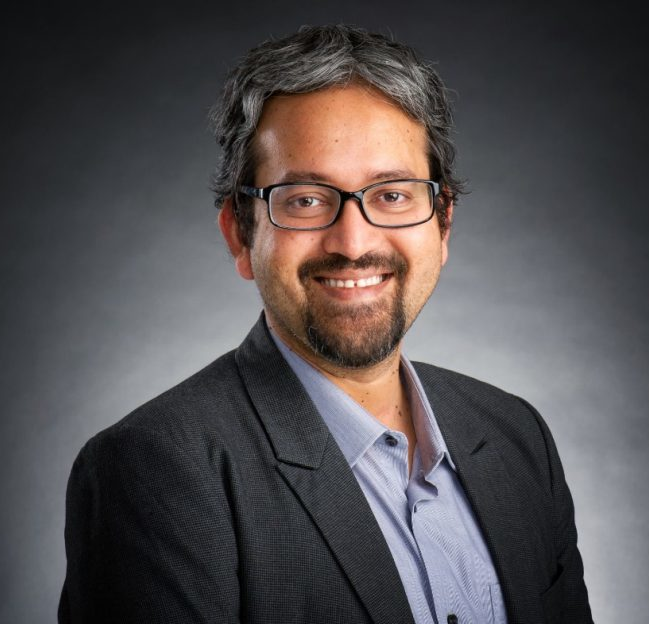 M. Madan Babu (CV) is a Member of St Jude Children’s Research Hospital and an Endowed Chair of Biological Data Science in the Department of Structural Biology.

He is also the Director of the Center for Data Driven Discovery. Madan is a Visiting Scientist at the MRC Laboratory of Molecular Biology, UK and an Adjunct Professor in the Department of Biochemistry and Molecular Biology, University of Southern Denmark, Denmark.

Madan has pioneered data science-based approaches to make biological discoveries and reveal fundamental principles in biological systems. His group has developed state-of-the-art computational and machine learning-based methods to interrogate large-scale biological data from diverse organisms. Madan’s group investigates biological systems at different scales of complexity: from systems at the atomic level (e.g., structures) to the network of interactions between molecules (e.g., protein interaction networks) to the level of an entire population (e.g., variation in the human population and cancer genomes). He envisions that his group’s research findings will help us better understand how mutations cause cancer and other diseases. This knowledge can be used in biotechnology, drug discovery, and personalized medicine.

Some of the key research areas of interest include:

Madan obtained his undergraduate degree in 2001 from the Centre for Biotechnology, Anna University, India with fellowships from the Indian Institute of Science and the Indian Academy of Sciences. He then received an LMB-Cambridge International Fellowship and a Trinity College Research Scholarship to carry out his doctoral research at the Medical Research Council’s Laboratory of Molecular Biology (MRC-LMB) in Cambridge, UK. During this time, he carried out studies on the structure, evolution and dynamics of transcriptional regulatory networks by employing a combination of computational approaches. For this work, he was awarded the Max Perutz Prize for outstanding PhD research in 2004. He subsequently received an NIH International Visiting Fellowship to work at the NCBI, where he defined general principles of biological networks’ organization. He returned to the UK to become an independent Group Leader at the MRC Laboratory of Molecular Biology in 2006. He was elected as a Schlumberger Research Fellow at Darwin College, Cambridge in 2007 and was appointed Programme Leader in 2010.

Madan Babu is an Executive Editor at Nucleic Acids Research, the Chief Editor of Molecular Systems Biology and a member of F1000. He was a Director of Studies at Trinity College, Cambridge (2011-2015), and a member of the HUGO council. He has published over 160 papers, reviews and chapters (h-index: 65) and has received several awards including the Biochemical Society’s Early Career Award (2009), EMBO Young Investigator Award (2010), British Genetics Society’s Balfour Award (2011), Royal Society of Chemistry’s Molecular BioSystems Award (2011), the Biochemical Society’s Colworth Medal (2014), the Lister Prize from the Lister Institute of Preventive Medicine and the Protein Science Young Investigator Award (2014) from the American Protein Society. More recently, Madan received the Francis Crick Medal and Lecture (2015) from the Royal Society, the inaugural Blavatnik Life Science Award (2018) and the EMBO Gold Medal (2019). He is an elected member of EMBO (2016) and Fellow of the Royal Society of Chemistry (2017).